Richard Janes and Ed Loffil
The Bishop’s Isles are a small archipelago of islands and the Southernmost of the
Outer Hebrides of Scotland. They lie south of the island of Barra and historically so named because they were owned by the Bishop of the Isles. The group consists of nine islands and numerous rocks. The main islands and named going South from Barra are Vatersay, Sandray, Pabbay, Mingulay and finally  Berneray or Barra Head. After which, there is nothing more going South for a very long way!

Beautiful islands, separated by Sounds of fast tidal streams and open to the full force of Atlantic wind and swell. Remote, committing and with such a fabulous name, Mingulay has been high on my dream list for many years. I first paddled to Mingulay in 2017, a highly challenging trip where on the West Coast our total focus was on the dynamics of the water rather than the Geography!  I describe here our visit in June, 2018 which was our second visit. 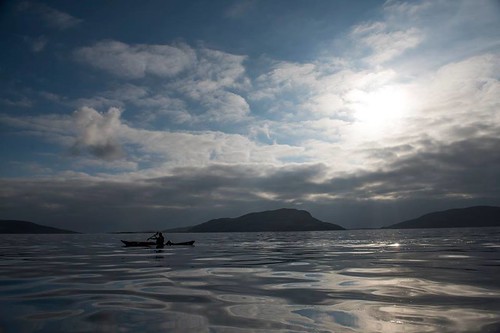 The starting point for this trip is Castlebay, Barra at the Southern end of the Outer a Hebrides. A beautiful spot which is quite easily accessible from the South. A ferry runs from Oban. We left a vehicle in Oban and used trolleys to carry our laden kayaks onto the boat. The five hour journey to Barra is a delight! A cruise up the sound of Mull followed by Ardnamurchan point with views of the Small Isles, Treshnish, Coll and Tiree. We enjoyed a fabulous display from a large pod of Dolphins and sightings of Basking Sharks. The launch pad for the kayaking trip is a slipway and a very short trolley from the ferry. 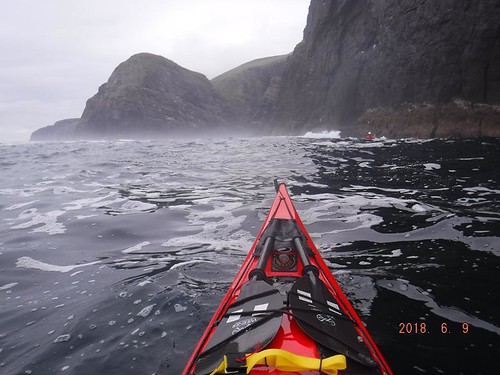 At the tail end of a long period of high pressure we launched at 7pm. Close to the longest day, it barely gets dark at these latitudes. We paddled South on a smooth sea with evening sun and very gentle air in ‘shorty’ cags. Stopping only to take pictures the gentle sussuration of wavelets on rock, punctuated by the evening call of so many seabirds created an idylic scene. We passed an otter about his evening duties. Crossing the Sound of Sandray, our
target for the night was Pabbay and we landed after nine Nautical miles on a pristine beach through turquoise water and camped on a perfect pitch of machair. Our bay was on the East side of the island but even here the  Westerley swell was enough to create sufficient surf to demand care when landing. We chose an exposed spot overlooking the sea but the still air brought out a few midges! Seals swam by at regular intervals and a porpoise was feeding. We must have been near a Tern’s nest, at least that was our explanation for the frequent attacks to my head by these beautiful birds! 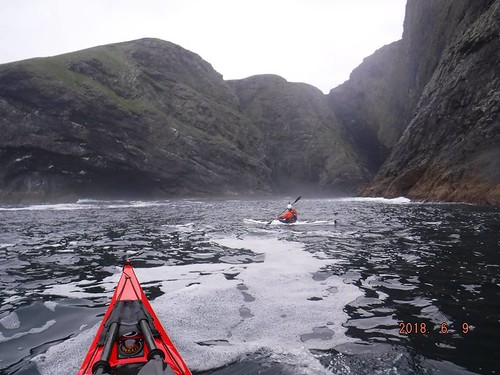 The next day was overcast but the High Pressure was holding. We paddled South across the Sound of Mingulay and down the East side of Mingulay. I started to feel apprehensive as we approached the Sound of Berneray. We had been paddling on smooth seas but from our previous visit, we knew the West Coast would likely be very different! Rounding the South East corner of Berneray we were on new waters for us. And what a place! Massive cliffs, topped by Barra Head lighthouse. Barra Head Lighthouse marks the southern entrance to The Minch, roughly halfway between the Eilean Glas and Rinns of Islay lighthouses. The 58 foot stone tower, built in 1833, stands on the west side of the island, at the top of a very steep cliff, making the light the highest in the UK with a focal plane of 682 feet above sea level. There is no shallow water west of Berneray to break the blow of the Atlantic storms and small fish are sometimes thrown onto the grass on the cliff top. 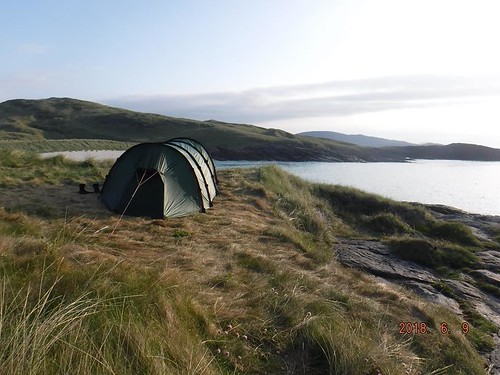 We were now on the Wild West side of the islands and being lifted by swell and thrown around by the very significant clapotis. The West side of Mingulay is truly amazing. The cliffs rise to 700 feet and with major sea stacks, caves and so many sea birds a total joy for sea Kayakers! We paddled close to the cliffs but the constant swell prevented any ‘rock hopping’ in caves. Besides, this is not a place for error. Totally remote; flares, VHF and phone are useless. We carry PLB as a ‘talisman’. We followed the Coast of Mingulay through the Sound and landed for lunch on the beautiful Mingulay Bay on the East side of the island before paddling North to our starting point on Pabbay. With fourteen amazing Nautical miles under our hulls, sleep was very easy.
Day three and decision time! Where to next? The forecast held good but a brisk North West wind was forecast for later in the day. From our camp on Pabbay, we paddled West through the Sound of Mingulay past Sandray and its islands, Vatersay and then followed the West Coast of Barra North and into the Sound of Barra. Another magical area, the Sound of Barra is surrounded by more fascinating islands and islets. We camped on a tiny island between Gighay and Hellisay. We had paddled with some effort to beat the start of the adverse wind and we made it! The breeze kept the midges away and the 21 NM day ensured another good sleep.

Day four. Sunshine and the wind (mostly) behind us meant a glorious cruise down the East side of Barra and return to Castlebay in warm sunshine. A fabulous end to a spectacular trip with a good friend. 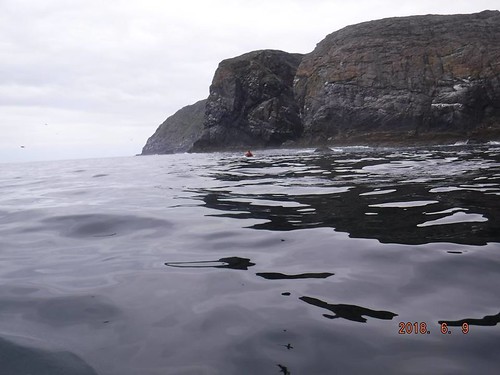 We paddled a total distance of around 60NM over four days. The distances are not great but the environment hereabouts is huge, in every way. It is rare for Westerley swell not to be an issue. The water is very deep and the reflected (clapotis) waves are significant. This creates turbulent water which may then be further confused by tidal streams and ‘wind against’ conditions. Not a place to be taken lightly.. 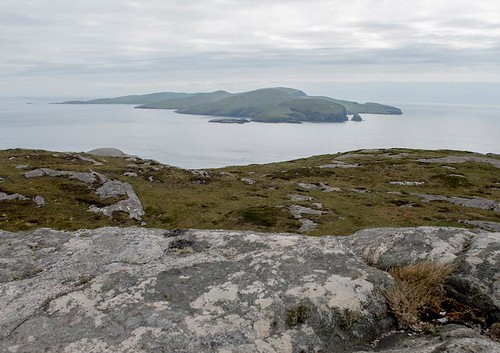 Of course, this was not the end of the trip. Sipping cold beer in the sunshine, looking South to Vatersay and beyond was a time for reflection. … “Slaintte mhath, Matey”; “do dheagh shlainte, …. your round!” 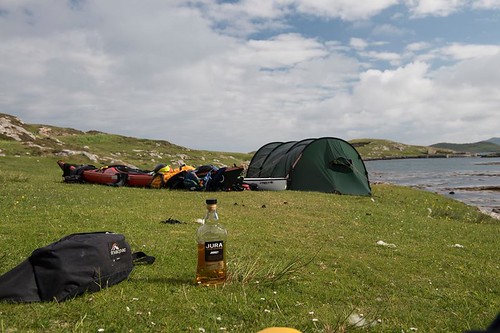 Beautiful Mingulay
A heart so bright, living and warm,
Genesis of my dreams.
Hewn by Nature’s might,
Anchored in a sea of swelling, brilliant silver.
Swell surges to massive cliffs
Rolling energy, harbinger of life!
Sliding with water,
Running away as time.
Expressions of immeasurable force.
Ancient beauty
Sobs to the bruising, blunting wave.
Dark rock,
Dressed by natures hand
Studded with whirring birds,
Screeching for their future and lifted in spume
Above the boiling black of the ocean.
Stunning, savage, powerful place!
Living , changing and timeless.
Fragile life of Mingulay,
Pictures of our now and yesterday,
May your ancient rock hold fast
To remain our keeper of forever. 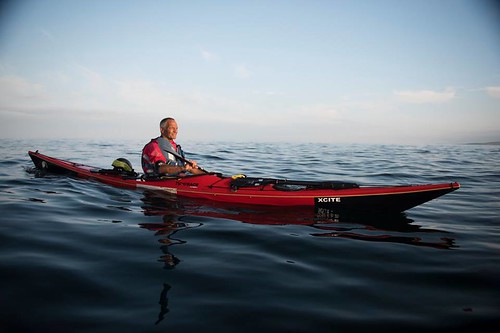